Menu
Log in
Register
You are using an out of date browser. It may not display this or other websites correctly.
You should upgrade or use an alternative browser.

Getting started in the Ludophiles guild - November 2016

The Ludophiles guild is called "Ordo Ludophilia". It's still a rather loose group with no specific focus or goal but that might change in the process of growing and developing.

Currently there are 100+ total members, and usually 40+ active members (=logged in whithin the last 40 hours.

Most are interested in PvE but any approach to the game and any playstyle is welcome. It doesn't matter whether you spend all your time pedantically executing thoroughly planned builds in PvP or whether you play very casually rather solo in a complete explorative style and just enjoy some guild chat once in a while.

However, let's start with the following guidelines and expand them if necessary:

The Ludophiles guild called "Ordo Ludophilia" is currently active on PC but inactive on PS4 (but if you are invited to change that).

The Ludophiles guild is currently available on the European Megaserver only.

Characters you create are bound to the Megaserver they've been created on. But it is possible to create different characters on both Megaservers. So if you haven't played on the European Megaserver yet just choose it after starting the application and create a new character.

Originally the guild was associated with the Ebonheart Pact alliance but was always open with for players of any alliance and after the One Tamriel update in October 2016 alliance association doesn't really matter much anymore.

The alliance a character is associated with depends on its race. Even if you don't have created character in the Ebonheart Pact you can join the Ordo Ludophilia guild, guild membership is based on accounts not characters.

Guild membership is based on accounts, each account can have up to 5 characters, each of which might be associated with any of the 3 alliances. Consequently we can play in any alliance, also each account can be in several guilds, so everything quite flexible.

The guild is called Ordo Ludophilia. You can join it as soon as you are actually in game with you character, but at that early stage it might be not much of a help.

Joining the guild is easiest by accepting an invitation to the guild. To send you an invitation we need to know your TESO User ID for PC or your PSN Online ID for PS4.

Best post it with a little introduction in this thread or on Discord, alternatively send your ID in a private conversation or a private message to a Ludophiles account on any platform.

What we can use to organize:

For info on ranks & roles please check out the post further below: Guild roles, ranks & permissions

For Werewolf and Vampire bites please check out the following thread: How to become a Werewolf or Vampire

PvE activity is taking place regularly but randomly. Best ask in guild chat or on Discord. The plan is to organize PvE activities with a fixed schedule asap. If you want to help with that please let us know.

PvP is optional and takes place in dedicated zones (Cyrodiil). PvP in Cyrodiil still doesn't mean you have to kill other players, you can as well increase the standing on your alliance by doing coop or solo quests. 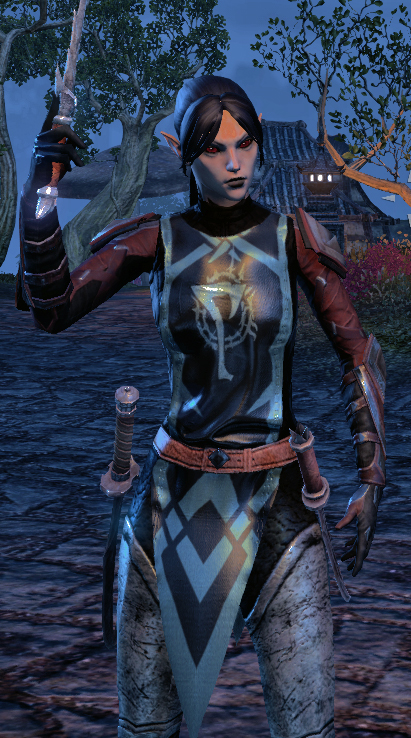 Feel free to ask any questions & make any suggestions, best by posting in this thread, alternatively in a private conversation, or anywhere.

And maybe check out the following posts in this thread:

Getting started in the Ebonheart Pact
...

You can freely choose a name. However, you might want to consider that it's a fantasy setting, "GTAfreak87", "CapJackSparrows", "Schnitzelwurm", etc might not be the best solutions.

In case you want a name as authentic as possible please refer to the following resources:

Choosing a weapon category is not part of character creation but actually done by using a specific weapon. You might want to plan which direction to go and use an appropriate weapon as soon as you've found it in game.

Check out the next post: The Wailing Prison - Soulshriven in Cold Harbor
Last edited: Sep 19, 2016

You start your journey in The Wailing Prison, doing the Soul Shriven in Coldharbour quest. The introductory style quest line is quite linear and easy to playthrough but further info can be found there:
Finishing the quest line will take you to Bleakrock Isle. Check out the next post for further info: Bleakrock Isle.
Last edited: Sep 19, 2016

So one...wir sehen uns in Tamriel

I don't always have access to a PS4 but I'd definitely be in. Played the beta on PC and really liked it. So CU on Tamriel!

And let's get more stuff in our ESO media cat https://ludophiles.com/media/categories/the-elder-scrolls-online-tamriel-unlimited.29/
T

Hi, my PSN ID is Cryorvus, like here, like in the Twitch chat. I played ESO on PC and let Zenimax copy my Char to PSN. This is an Daggerfall Char, so I prefer the Daggerfall alliance. The Daggerfall Quests are really cool. If you want a other alliance, its ok for me. New Quests would be nice too.

English or German doesn't matter. If there are non Germans Online, I will try my best
T

@TomThomssen: There is only one PSN ESO Server. On PC, I wasn't logged in for a long time, but as far as I know there is no PVP in ESO. PVP fights can be done in a arena. The relative new "Tamriel Unlimited" brings a headhunting system. If they get you stealing or murdering NPC's there will be a head-money for you and other players can attack you. The third way for PVP are the big battles in cyrodiil. You have to level up first to get access to them (level 25, if I remember correctly). I never visited a cyrodiil battle (because the quests are really good), but I heard there is a system to reduce the diffences between high level and low level players.
T

Good to know and thx the for your explosionsartig cryorvus
T

Was trying to find more info, there we go:

Tomorrow I'll get my Mini-Keyboard to connect to the Controller. Whats about Voice Chat? Try the PSN build in System? Note: We have to check the limitations of PSN Party. Or is Teamspeak and the line to the server more stable? PSN speed sometimes decrease. Audio at PSN is sometimes low volume and cracked for the first minutes, then getting better.
T