... and I mean annoying in the best sense of the word. The annoying bit about this is the fact that you get annoyed with yourself for not completing the level and trying it over and over again until you do. That reminds me of games I used to play a long time ago when I was a kid, getting mad at the game for not letting me finish a level, trying different ways to complete a level and after a 1000 times finally getting it, YEAH !!!! So, yeah a pretty addictive game I guess.

The graphics of the game also takes you back to the early days of video games, even though the 1920x1080 graphics (it goes up to 4k) is way better then they were back then, it looks simple. Just black, red and light blue and just a road with some wire frame hills on the sides, red sky and your flying Void ship (that's how they call it). Graphics is definitely not what this game is all about, even though it does look nice (has a bit of a TRON vibe going on), it is all about the game-play. 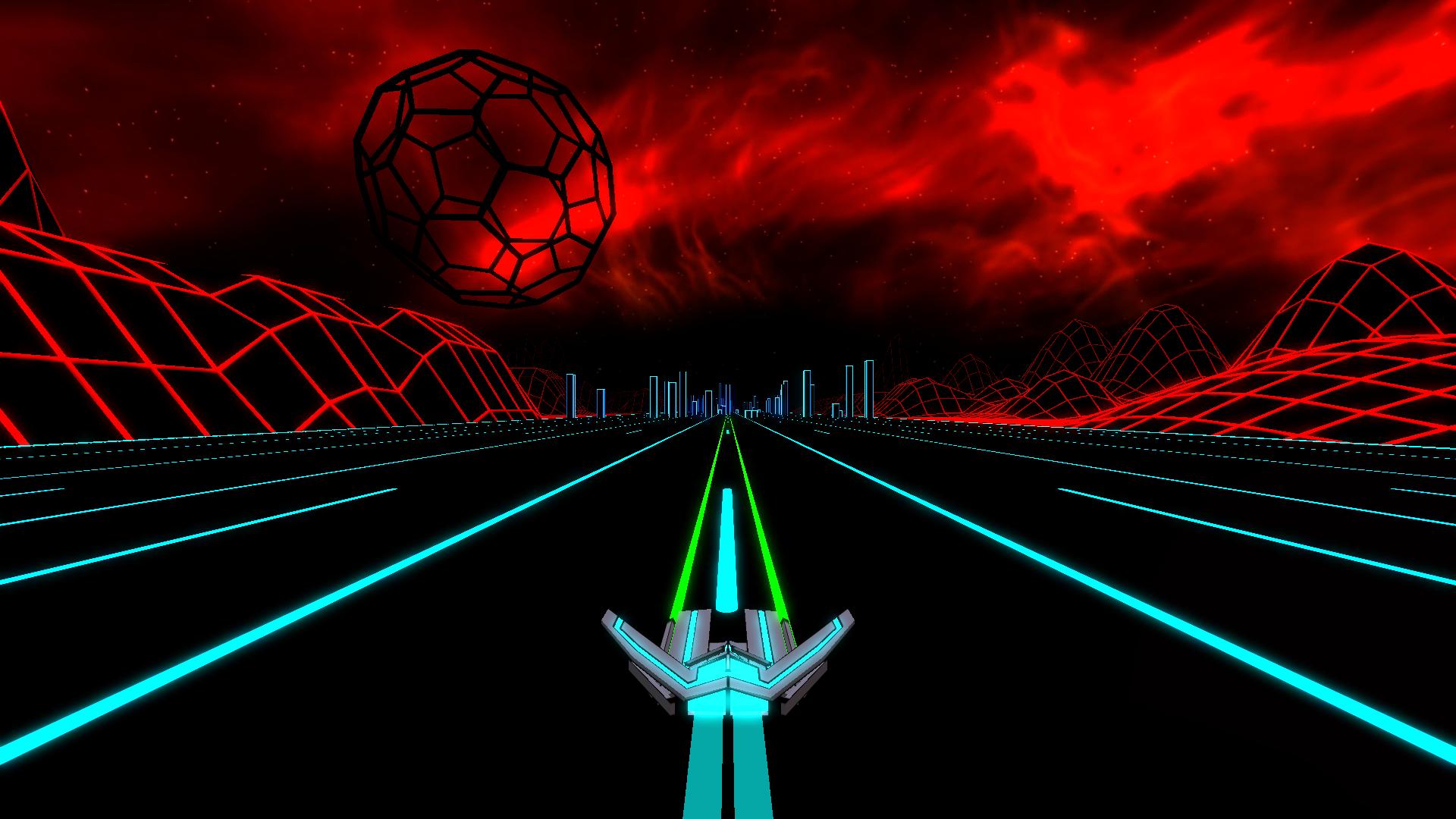 The game-play is rather simple as well and your goal is even simpler, get to the end of the race track in one piece, there is no timer or anything, you just need to get to the end. While you progress in the game you will get different enemies and different obstacles, from a rotating windmill like feature in the middle of the road, too a moving wall and falling blocks and red balls that attack you, too trains that just plow trough the level.


"Void 21 is a procedurally generated, arcade style, fast-paced runner and shooter. Check your instruments and strap yourself in for some intense pilot training with the highly manoeuvrable (and lethal) Void ship. Your objective is to reach the end of the level, either as quickly or as violently as possible - or both"
You use your arrow keys to control the Void ship, left, right, accelerate, brake, could not be simpler. You also use your Q, W, E and R keys for upgrades and weapons to shoot down enemies that are on the track, but you can also choose not to shoot them but simply avoid them, all up to you. One of the upgrades is shown in the image above, which projects lasers on the race track so I can point my Void ship easier between 2 obstacles. I guess so far this does not seem all that exciting, but I should mention that this game is FAST! Your Void ship does not stop moving, EVER, you are just able to slow it down or speed it up a bit and you have to anticipate the obstacles you are going to encounter, figuring out where the way trough will be when you actually get too the obstacle.


You start with 4 training levels, explaining how the controls work and what you need to do. During the training you will get to know a few of the upgrades, weapons and enemies and you will be getting used to the controls, the speed of your Void ship and the way you have to 'look' at the game. I will not explain that last one, you will understand what I mean when you play the game. When those 4 levels are done you get a few options for game modes.

Daily Run
You get 30 levels each day and you go trough them one by one, getting a new level each time you complete the last one. You get point after each level and those point are added up to you daily total and compared to other players here.

Endless Run
The name might suggest that this is a endless level you can ride as long as you can, but it is actually an endless steam of levels you get one after the other. The trick in this mode is that each time you die you start over at level 1 AND that the level 1 you played before is not the same one as you are playing now. So the game is endless until you die and than you start all over again.

Pick Seed
You have to chose a variable in 8 settings, ranging from the width of the track, the amount of enemies and the density of the pillars. Each setting can be set to 0-9 and a-z giving each 36 options to chose from. This will give you a whopping number of 2821109907456 level to choose from and each time you or a friend sets the numbers to the same setting you get the same level, so the race against your friends is on !

Conclusion:
As mentioned above (a few times) the game looks simple and plays pretty easy, but what sets a game like this apart is the game-play, which is great, and the challenge which is pretty easy to begin with, once you get used to the game and the controls, but gets pretty difficult pretty fast. At the very beginning of the game you get a Photosensitive Seizure Warning, one you get for a lot of games, but with this one I can imagine people having issues with it. After a short time playing and concentrating on my screen I needed to stop playing for a while, which I did not want to do, because I 'NEEDED TO FINISH THE LEVEL' but I did anyway. If you are into race games or old school games this is worth the €10,99 for sure, just don't be surprised if you spend more time on this game then you planned too.