This War Of Mine

Is it a war game? Is it a survival game? Yes, in both cases, but not like you might expect.

In war, not everybody is a soldier

This is the subtitle of the game this war of mine and it explains a lot about the game. This game is both a war game and a survival game as you need to survive in a war torn city. No zombies, no wild animals just your fellow survivors and the need to do anything you can to stay alive. How you do that is up to you, will you help people in the hope that they will help you in time of need, or will you go around stealing peoples possessions and even kill someone to get them?

You find yourself in a bombed house in the middle of a war torn city. The game itself does not mention which city you are in, but a video on the publishers websites tells a story of a survivor of the siege of Sarajevo, so it seems likely that Sarajevo is at least the inspiration of the game.

Official release trailer for This War of Mine, titled "The Survivor", published November 14...

This is easy, the goal is to survive until the war is over. How long that will be, nobody knows as nobody know how long the war will last, a month, a year, just one way to find out.


To survive you need to gather resources so you can craft furniture, weapons and food, all of which are crucial for your survival. Without a bed you will sleep very bad (as the concrete floor is not very nice to sleep on) and you will be less productive during the day. Without weapons you will not be able to defend your house against looters, but it will also make it a lot harder to be a looter yourself if you so choose to be. Without food, well thats an easy one, you will starve to death.

The game is basically a click and move, 2D platform game, where everything takes place in a cross section of the locations you are at. Little icons hover above the spots where you can do something, like collecting resources or picking locks to open doors. 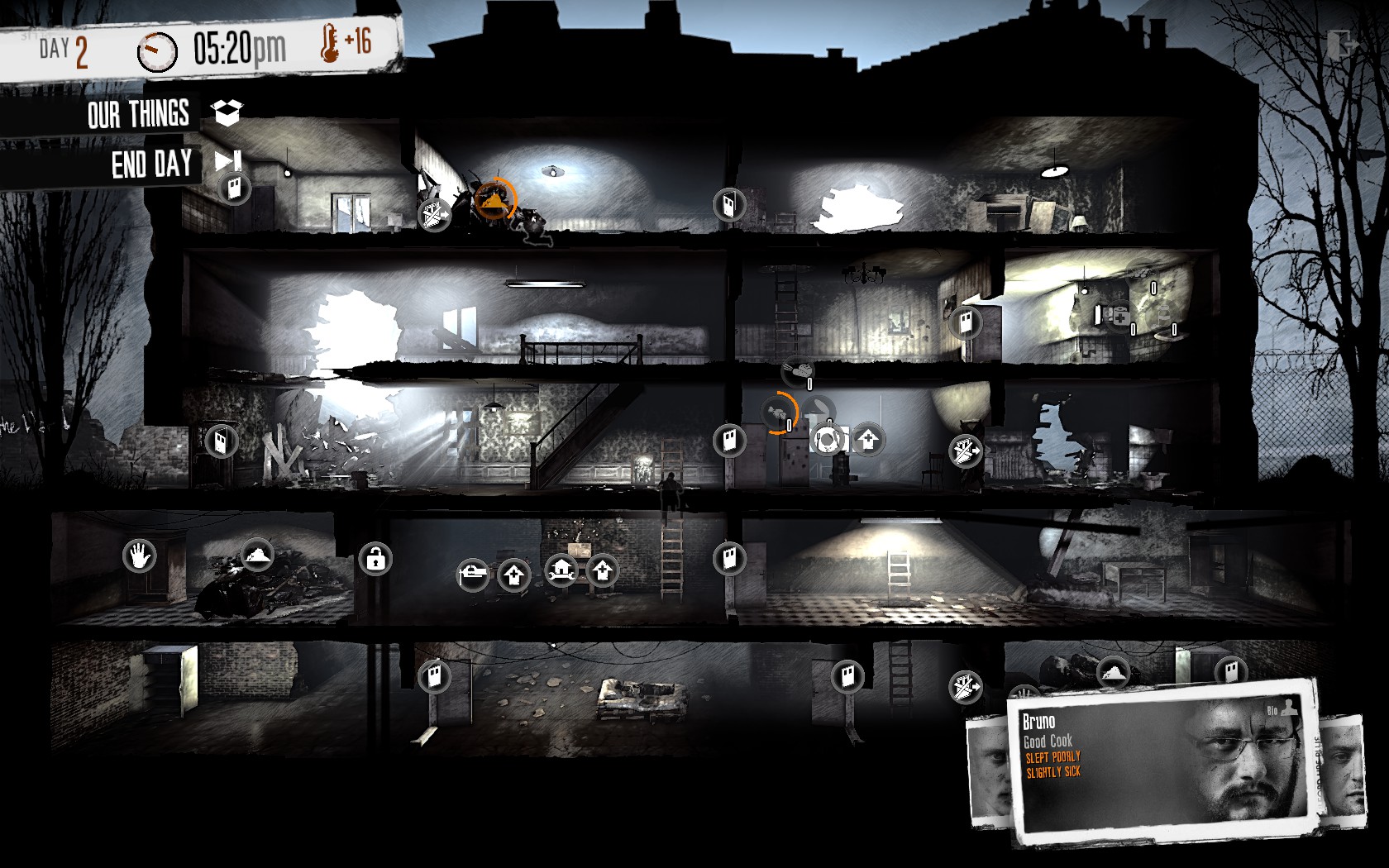 The house your people try to survive in.
During the day you can do work in or on your house, patching up holes in the walls, crafting furniture or weapons, cook the food you have gathered or rest in bed or a comfy chair and read a book.

There are various upgrades you can craft for your house, metal workshop that makes you craft weapons and lock picks, animal traps that catches rats you can eat or cook with, rainwater collector that collect water used for cooking and many more.

During the night you need to defend your house from looters (which is an automated thing), sleep or scavenge your surroundings, the latter being the only the player can actively perform. Before the night starts you have to choose who does which activity and the skills your people have might affect the outcome in those activities, so pick them wisely. If you picked someone to scavenge the city you get to choose the supplies and tools that person brings with him. Maybe a weapon, maybe a shovel or maybe some medicine someone might need and you can trade.

There are different locations you can go to, some are abandoned locations which are easy to scavenge, others have people there that are friendly and helpful, but there are also locations where people are hostile and will do anything to defend their house and supplies. So, do the risks of getting wounded or dying outweigh the benefits of the potential valuable items you can gather? 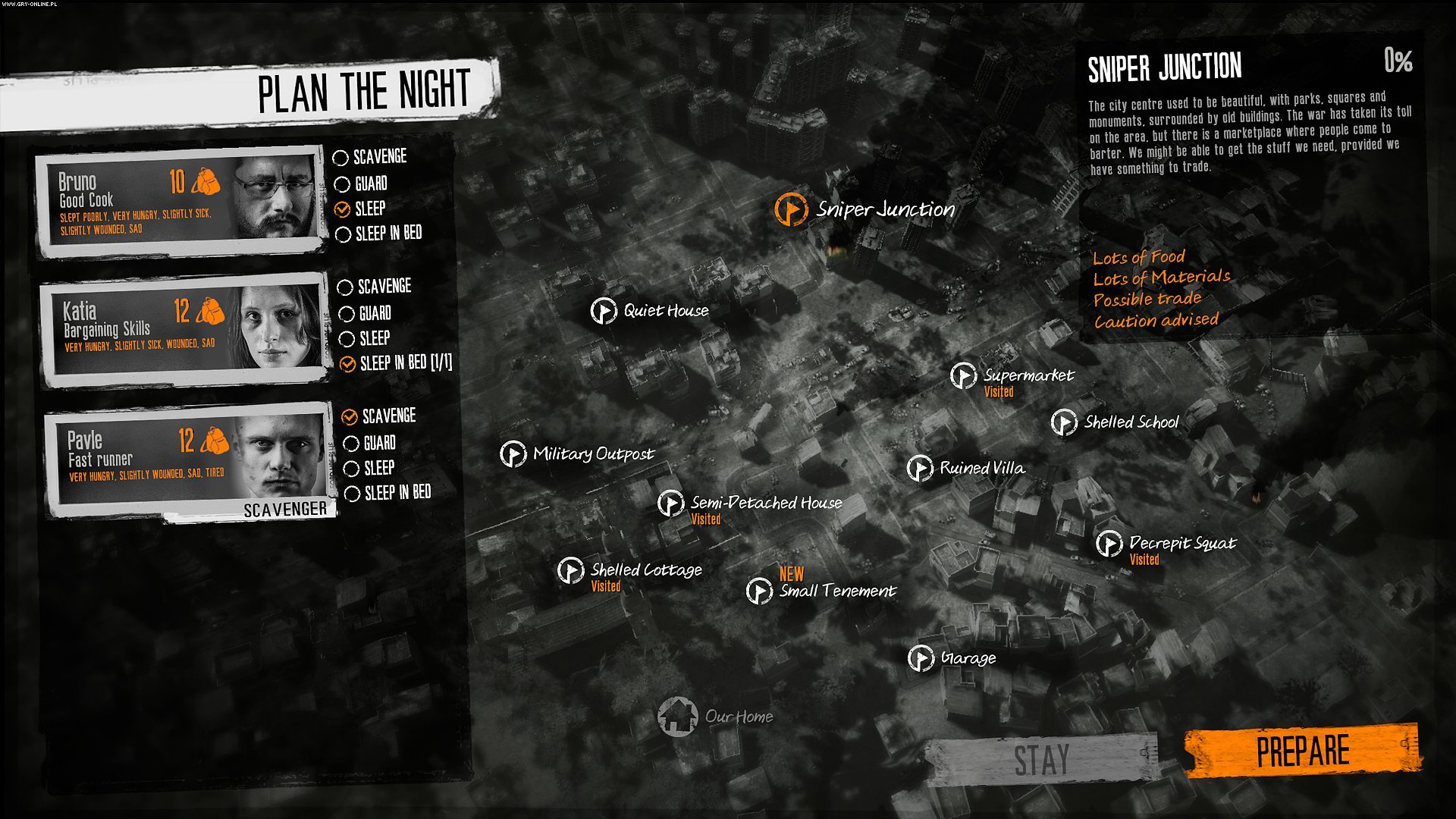 Map of the city and the locations you can scavenge.

As you can see in the article above the game is all about choices. Will you bring crafting items or food back from your scavenger hunt and what will that do with your friends, will you give them warmth by sacrificing a day of food? Will you steal food from your neighbours knowing that that will cause them to starve in the end and will you be able to handle the guilt. Will you hand over some medicine to some poor children at your door telling you their mother will die without them? 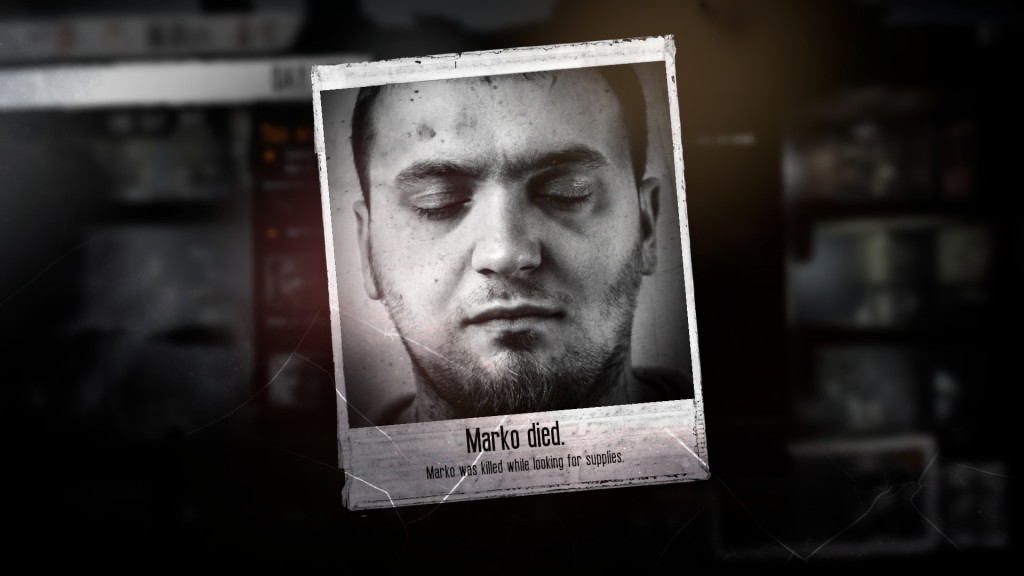 Picture that shows you one of your people died.
Conclusion

My fellow Ludophiles know that I do not like the usual genre of survival games, mainly because I do not like zombie games. I do however like the concept of surviving by primitive means and all by your own hand. Therefore this game is one that appealed to me right away, right after Eric (a fellow Ludophile) showed me the trailer video. I have played a few rounds now and so far I have managed to survive 16 days before one of my fellows died and all the other were very hungry and depressed, mainly because of the lack of food in this round. So I will be starting over again, hoping for a bit more food this time.


I think I found the one survival game I actually like.

Like this review?
Support the author.
Please donate on:

I actually find this game very immersive. It was well designed and makes factors such as emotion very realistic. The different scenarios placed in the game are definitely realistic as well.

They did a new trailer. Cool thing is that at the end you get a choice, help the girl of walk away. Make that choice and see what happens.

A game "not for everyone" but one of the few I really really enjoyed the last few years. And it's currently -50% on GOG summer sale

Today 11bitstudios announced This War of Mine, The Little Ones.
http://www.11bitstudios.com/blog/en/16/this-war-of-mine/86/the-little-ones-coming-to-ps4-and-xboxone.html
This game will come to PlayStation 4 and Xbox One on January the 29th 2016.
It's based on This War of Mine, puts you in charge of a group of adults and children stuck in the middle of hell, trying to survive in a besieged city; struggling with lack of food, medicine and constant danger.

Now I just have to find some time also to play this game in a 2016 already chock full of interesting games on PS4.
Last edited by a moderator: Aug 27, 2015

Interesting, wonder how this will look and play.

It's probably like an add-on to TWoM, same game, same look & feel but additional features.

A new development diary video about the console version of this game:

Lovers of board games good news:

11 bit studios is teaming up with veteran board game designers to bring This War of Mine to the tabletop, adapting the drama and tension of distraught civilians trapped in a war-torn city. TWOM The Boardgame features a multiplayer experience for up to 6 players, as well as a solo variant. You will be able to play as the well-known characters from the electronic version of the game and face hundreds of new challenges and difficult choices. More details here http://www.11bitstudios.com/blog/en/16/this-war-of-mine/91/the-boardgame.html
You must log in or register to reply here.
Share:
Facebook Twitter Reddit Tumblr WhatsApp Email Link