Ok, here is what I prefer:

Maybe the Wolfes in something that looks silver, but I don't know how visible the borderlines are InGame. It's also a pitty there is no possibility at the WebSite to generate a preview.
Last edited: Jul 6, 2015

I agree with Cryovus on the wolves, although I like the toothed version a bit more:

Not too sure if the ludophiles color would be too bright in-game, perhaps a darker tone of it like R 23, G 95, B 119 would look better.

Damn, I knew it. I received in-game mail that looked very much like an official e-mail, stating that the guildstore could now be unlocked but needed an initial payment of 1000 gold to do so. Basically I paid some scam-artist who named their character "Guildstore" 1000 gold for a ruby. I should have checked if it was true lol.

lets have a look at all messages...

@Dahlia Gray thought we can handle it with the fungeral Grotto. Quest isnt finished because you will get it in front of the grotto ;-) Think we can share the quest. In my opinion u should get a level higher before start.

@Cryorvus totally agree with your opinion about the voicechat dont know how we can manage this. Sad about the non-chatfunction ingame and i wont write any messages to all... btw the wolves emblem fits most.

@Eric good idea, thought a poll about the heraldy would be perfect. Dahlia should talk about it at Wednesday in stream. Thank you for changing the permission at the Rank "Recruit"...but one more option needs to be "activated"..."Recruits" should be "invite other Members" so today only you as leader, Officers and Members can invite. At least you got a gramma fail at "Mitgliednotiezn bearbeiten"

Was just trying to get the heraldry done but it seems like it needs 5000 or even 6000 gold... (the internet, endless pool of information, 90% wrong)

The wolves by the way are indeed hard to recognize, simple items with little detail work better. From the banner shapes the ones with more secondary color seem to work better. And colors don't seem to be just colors but have properties like shininess attached. Also, the same color can look very different in different light situations.

However, let's get moar gold.

Its hard to imagine how it could look ingame. Can you make screenshots please? For me, the eye symbol is also ok. Btw. found one new member for the guild today. 28 left to qualify for a npc trader. We rocked the Fungeral Grotto again. This time including the big crab. New guy is a lvl 15 Nord Paladin called Shadow_Blade7.
Last edited: Jul 13, 2015 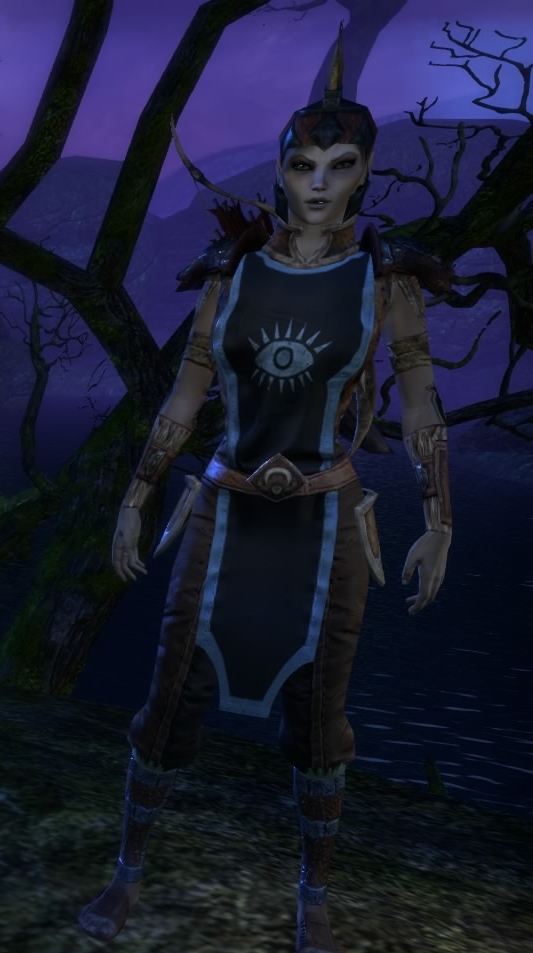 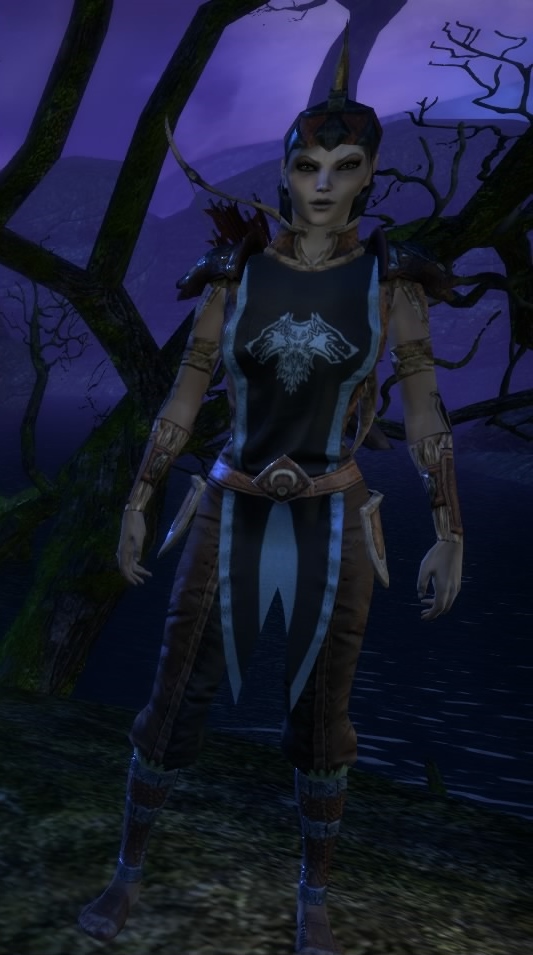 In this color combo it works best, I think. Wolves were voted so let's not change that.

Lets stick to the wolfes. I thought they would look bader, because of the details, but the screenshot told me better. The toothed version fits perfect. From my point 100% acceptance for the lower pic.

Would you blessing this?

aahmm yes i think the lower pic/Design would be perfect. Sorry for my short visit im a little bit tired. In a couple days ill read all the comments and give feedback.

We got guild heraldry. I was 5000 Gold, each change to one of the elements (banner shape, banner primary and secondary color, symbol and symbol color) is 1000 Gold.

It seems like you can purchase tabards (Wappenröcke) in the guild store, which we don't have yet. So I guess 50 members would be the next goal, besides more activity in general.
D

Queen of the Ludolands (and beer)

Bottom pic looks fine to me too.

Found a Link about that Synergy thing:

My Dragonknight can do the "Dark Talons". Next time we should try out how mighty that is, using the additional synergy effect called by other players.

everytime i see the "push Triangle+O" option i tried it but i dont know if it works. So we need to find out next time, my charakter has a "Nova" Ability which means if any groupmembers push the synergy it will dealing damage and stunning all enemies in the area. But i have to check if i got one skillpoint at this spell otherwise it wont work.

@Micha183:
I read some text about Cyrodiil battles. Quintessence was: we were naive idiots, attacking a castle as a duo. Generel opinion is: Never go to Cyrodiil with less than 4 people. If you have 4 people, just attack the lonley guys trying to reach the battleflield again. To attack a depot effectivly, you'll need minimun 3 full groups (means 12). To attack a castle 40 people. A chaotic guild will have no fun. Targets have to be set and everybody has to follow these commands to have success.

How this works practically, we have to check.

I think at the next TESO Stream (whenever it will be) we should try to activate as much guild members as possible. If there is a fixed date, I'll send ingame messages and leave a hint to check the forum. We have to organize the groups beforehand. Otherwise it will take to much time during the stream.

I think we have many players with more experience in Cyrodiil than I have. Especially in using siege weapons. Please share your knowledge.

You definitely need a group, but also loads of other random players. The map will show where fights are happening, and you just have to run along with the biggest group you can find.

Like I've suggested earlier, we probably should decide on a specific campaign server. Because switching your "Home" server to a different one will cost a lot: 15000 alliance points. You can set one server as "Guest" but you can only switch to a different one every ~4 days or so. (You can't join any of the other campaigns, only your home and guest campaigns.) ----> So if we want to do this on stream sometime, we have to decide on a campaign server so people have time to switch.

Currently I'm in Thornblade server as guest, but there's not a lot of action there as our alliance has dominated the entire map. It's good to do Cyrodill PVE quests in there though, but for PvP action we should join one that's well populated by all three alliances. I think the top one, Azura's Star(?) is always well populated but the campaign runs long, 30 days.

To clarify, your "home" server is the only one where your actions count towards leaderbord standing. After a campaign has finished you'll get a reward sent by mail depending on your standing. I already received a purple weapon this way, but higher up on the leaderboard you'll get yellow/epic rewards. There are also PvP campaigns that are shorter, I think there are campaigns of ~4 days, 7 days, 14 days, 30 and 90 days? Some are restricted and can't be joined by high level veteran players, and allow only up to level 40 players.

I've seen that people of our crew are spread out over most of the different PvP campaigns, perhaps someone is in one that has decent PvP action, no single overpowered alliance and preferably doesn't run longer than 14 days? Please let us know...


About Siege weapons
First of all, do the first few quests in Cyrodill! It will give you siege weapons training so you can try them all out.

There are different types of most weapons with fire, poison, etc. It's best to read up a bit on what each siege weapon does and what to use them on: http://elderscrolls.wikia.com/wiki/Siege_Weapons But if you're just starting out, fire versions are usually a good choice.

In any case, only use siege weapons in spots where you feel safe and are protected by others around you. I've found it's good to defend a castle from the top floor (if enemies have broken through the wall), that way you are harder to hit from enemy siege weapons at the ground level and safe from enemy Nightblade players, at least until they've broken the doors of the castle down. Outside the castle, high level Nightblade players can stay hidden and set your siege weapon on fire even with friendly players around you.
Last edited: Jul 27, 2015

seems you were right @Cryorvus ... how naive *facepalm* but hey it was good to make our experience. Anyway, our next trip to this Area need a lot more EQ (healpotion etc.), a higher level and definitly a bigger group.

Does it make sense after all to put energy and time in this project? Dont get me wrong but it seems the hype about Esotu is over

I neglect TESO, but I'm not ready to let it go.

To be honest I'm having the most fun in PvP, it's definitely the end-game content you can play endlessly. The PvE quests get boring really quick imo. Unfortunately for PvP it's best to use a high level character so you're going to have to do PvE quests to get there...

Also light armor classes like sorcerer are easily killed in PvP unless you're near the max level, I stopped levelling my lvl25 sorcerer and now have a lvl 17 Nightblade. Now I actually do some damage to enemy players and can safely get away from enemy groups using the stealth skill, as a sorcerer you're just an extremely easy target until you can teleport.

btw, I've now tried Azura's Star 30 day campaign. It's very active, but the waiting time to get in can be very long too. I think I had to wait 30+ minutes and it was already around 2AM, it's even longer during daytime/evening when more players are online.
Last edited: Jul 29, 2015

yeah your right about the PvE, it only makes sense if you got a group of motivated players otherwise its gettin boring very quick. But unfortunaly my healchar needs help to level up or i need to make changes at the skilltree. Anyway..Esotu isnt finished for me but i need a break in this. Sooner or later ill be back at Tamriel
You must log in or register to reply here.
Share:
Facebook Twitter Reddit Tumblr WhatsApp Email Link